The Suri is a breed of alpaca distinguished by its long, lustrous and slick locks that lie parallel to the body.  It is the rarest species in the Camelid family (llamas, alpacas, camels, guanacos, and vicunas) representing only 6% of the Camelid population worldwide.  Domesticated for over 5,000 years and found mainly in Peru, the Suri was revered by the Incas for its unique fiber qualities and reviled by the Spaniards who wanted to populate South America with sheep.  Suris endured years of attempted extermination, but eventually prevailed, and today, the fiber is prized by fashion houses around the world for its luster and drape.

Suris are a manageable size at 150-200 lbs  They are typically shorn once a year, although some may be shorn more frequently.  They have a fine fleece, with micron counts ranging typically from 18-28 microns, depending on the age and quality of the animal.

If you have an interest in Suri alpaca ownership, we encourage you to visit the following two links to find a Suri farm near you: 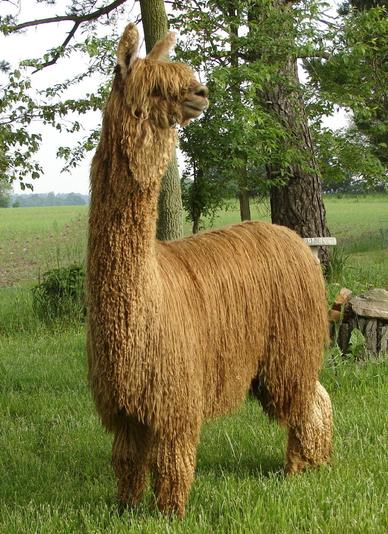 Suri fiber has no crimp, unlike Huacaya alpaca fiber (the latter most often just referred to as "alpaca"), and thus, no loft or bulk.  The fiber characteristics create a very finely spun yarn that works well for hand knitting weights from lace to sport, and for worsted counts no lower than 3/6.

Knitting or weaving with pure Suri results in a heavy fabric and the lack of crimp will reduce elasticity.  As such, we encourage people to consider adding a blending fiber with Suri.  Additionally, when knitting with Suri, an open stitch is encouraged for larger garments.

Suri is known for its drape and luster and when used in the proper applications, is breathtaking to behold.  This fiber comes in a wide range of natural colors including white, fawn, brown, black, and grey, but when dyed or overdyed, the intensity of the color is magnificent!

We are passionate about our fiber and we encourage you to join us in our enthusiasm!